You are here: Home | News | Multispares Racing | Round 5 Review

Round 5 of the 2019 Touring Car Masters series was run last weekend at Sydney Motorsport Park, formally known as Eastern Creek, as part of the Sydney Master Blast and Muscle Car Masters.

For the first time the TCM cars raced on the Saturday night under lights and over the weekend put on some sensational racing.

Ryan Hansford turned up fit and ready and after Friday’s practice it was obvious the front group of 5 cars would again be split by tenths or hundreds of a second. Bowe, Johnson and Seton was once again joined by Hansford and team mate Harris. 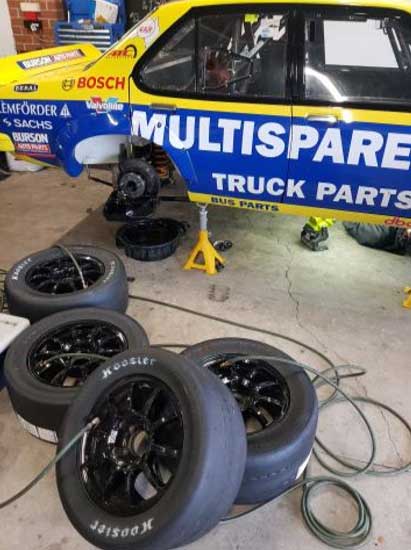 With an extra race than normal, qualifying was about doing the best lap time in the least amount of laps, so Ryan put down a time he felt was good enough to remain in the front group and pitted after only 3 flying laps. He did end up 5th, but there was a good gap to 6th so it was going to be all about the racing and particularly the last two races on Sunday. The Multispares Torana has now got good pace on new tyres so the next step for Ryan and team is getting the balance in the suspension so that he keeps the speed up as the tyres go off. By the last race the lap times are a full 2 seconds slower than qualifying.

Race 1 was super tight and whilst trying a few moves Ryan had to settle for 5th. In the qualifying for the night race Ryan put in a ripper lap and was 3rd only .14 of a second off pole position. Off the start he made a great move passing Steve Johnson into turn 1, but had the fast starting Ryal Harris go around the outside. Seton then passed Harris into turn 1 on lap 2 and Ryan pulled off a super move around the outside of Harris and very nearly grabbed the lead. Sadly going into the final turn flew the kerb at the wrong angle in the dark and spun the Torana right in front of 22 TCM cars and luckily everyone missed hitting him.

Race 3 was Sunday morning and the top group of 5 all arrived at turn 1, in a pack with Seton, Johnson, Ryan, Ryal and Bowe all jostling for position. The video link

shows just how close it was and the skills of these guys. Ryan hung in and picked off John Bowe under brakes into turn 2 and then a fabulous move around the outside of Steve Johnson in turn 3. Fantastic racing.

From 3rd on the grid in race 4 Ryan diced hard as all the cars had their tyres going away with grip and finished a fine 3rd to take 1st in ProAm for the weekend. This also moved him up to 6th overall and 2nd in the ProAm points now only 69 points behind. With 200 points on offer each round Ryan is well on his way to taking out another ProAm championship.

The next round is Bathurst on October 10 – 13, with all races live on Foxsports and Kayo. Like most years one or possible two races will also be shown on Free to air.