Round 2 of the 2017 Touring Car Masters series will be run this weekend, May 19 – 21 at Victoria’s Winton Motor Raceway.

After a successful first round in Adelaide for the Clipsal 500 where Ryan Hansford qualified third, the Multispares Racing Torana has been back to the Peters Motorsport workshop where the crew have put in a new pedal box and moved the seat so Ryan can drive the car without being completely cramped and finishing races with “pins and needles”.

In addition, the team have found a little in the set-up of the Torana, and during a test last week at Queensland Raceway, Ryan Hansford was super happy with the handling and is confident of a strong result around the tight and twisty Winton track.

“In Adelaide, I was super cramped and driving carefully as the last thing I wanted was a crash. My legs were hard up against the wheel and around the streets of Adelaide you have to drive with confidence and aggression to get the best out of the car.” Said Ryan

“The Torana was only delivered 2 weeks before Clipsal so we only had time to sticker it, make sure everything was tight, tune the engine at the dyno and do a quick practice and load it into the truck. For round 2, I will start to feel at home in the car and can’t wait to drive it again – It’s a beast, but plenty of fun.” Hansford added

Practice, qualifying and all 3 races will be shown live on Fox Sports over the weekend.

If you can’t get to watch on TV, keep up with Ryan via the Multispares Racing Facebook page – see below. 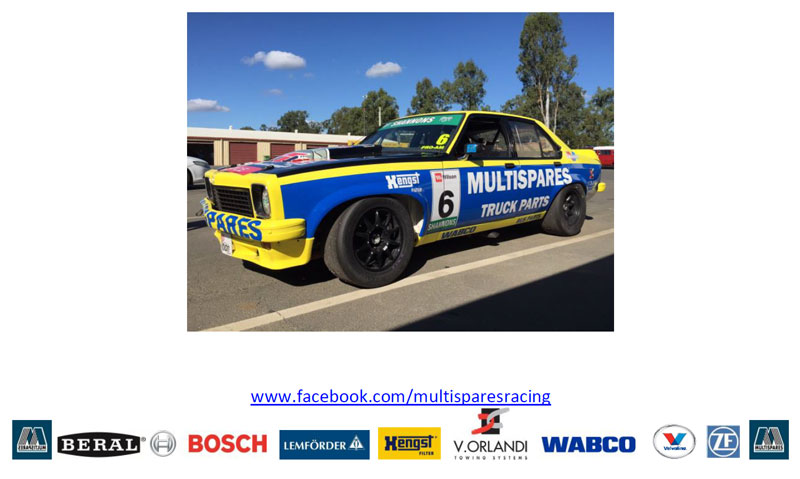